A 93-year-old has shocked residents of Kamwiyoni village in Murang’ a County after he singlehandedly buried his 70-year-old wife without involving his relatives or villagers.

Mr. Gachuma Gacheru buried his second wife, Susan Mugure, at Murang’a Cemetery all alone following a family disagreement over where she would be buried.

Ms. Mugure was married to Mr. Gachuma for 50 years and succumbed to cancer on Friday last week at the Murang’a Level Five Hospital.

After learning about the demise of her mother, Ruth Wangari informed her family members including Mr Gacheru and burial arrangements commenced.

“We embarked on burial preparations with our family members and friends to give our mother a good send-off,” she said citing that her father had two wives but the first wife died a long time ago.

However, as burial plans and discussion began Mr. Gachuma’s children could not agree on the grave site following inheritance disputes.

Perhaps out of anger, their father woke up very early on Monday and headed to the morgue without informing anyone.

According to Murang’a County government cemetery caretaker, Samuel Mwangi, Mr Gachuma came to his office at around 9 am where he sought to know the rates for acquiring a grave site at the cemetery.

He paid Sh1,000 and proceeded to the mortuary where he presented the burial permit to the morgue attendants.

The attendants released the body and upon his request accompanied him to the cemetery.

They help carry the casket and buried her in a body bag as he did not present clothes at the morgue.

“What surprised us most was the cross. It only bore three letters S.M.G and when we asked what they meant, Mzee told us to keep off his business and concentrate in helping him bury his wife,” an attendant who requested anonymity said. 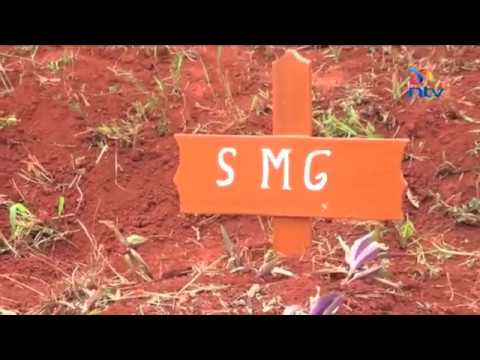 He astonishes his children the following day when he narrated to them of how he buried their mother at the cemetery.

“I buried your mother and that chapter is now closed,” he said.

The dumbfounded children have asked for intervention by the authorities for an order to exhume their mother’s body and give her a decent burial.