Kiambu governor Ferdinard Waititu has been criticized after he was captured on camera monolizing as well as intimidating Witeithie Market Chairman who has been been against his style of leadership.

On a video circulating online,the governor is seen slapping the chairman as well forcing him to sit down on a mud .

There has been a crisis in Weteithia after traders claimed that some leaders weren’t not elected but through intimidation they imposed themselves as leaders. 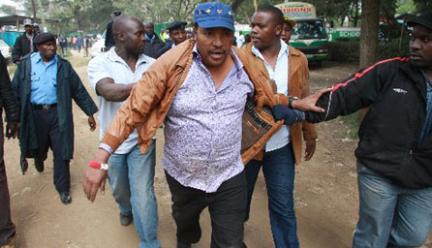 “Get this man out of he and he should never come again,Waititu said amid cheers from traders,

“Nani Mwingine? eeh huyu ? eti MCA? show me all of them they will be arrested right now,they pretend to be leaders for them to disturb traders,”Waititu said.

After identifying them,Waititu frogmarched him to sit on a dusty floor as some other members oppose the action.

Some traders are heard complaining of the action calling for the action taken against the governor.

“Martin was elected and we don’t know what is wrong with Waititu, this is intimidation,”Worried traders are heard complaining.