The World Bank has approved a $250 million loan to Kenya to help with affordable housing in the East African nation, where many would-be homeowners struggle to obtain long term housing finance, the bank said on Wednesday.

Kenya’s plans to set up a mortgage refinancing company are intended to meet the government’s aim of providing 500,000 houses in five years and make it easier for banks to obtain long-term financing for home loans.

Kenya has an estimated 200,000 annual housing shortfall, expected to rise to 300,000 by 2020. President Uhuru Kenyatta says affordable housing is a key priority for his second term.

“Urban housing currently remains unaffordable for most Kenyans due to the cost of financing, the short loan tenures and the high cost of properties,” Felipe Jaramillo, World Bank Kenya Country Director, said in a statement.

KAHFP is expected to increase access to finance by tripling the proportion of urban households having access to a mortgage, the World Bank said, by working with financial institutions that target borrowers on low and irregular incomes.

Kenya had just 24,458 mortgage loans valued at $2 billion or 3.15 percent of GDP in 2015, compared with outstanding mortgages in South Africa making up about 30 percent of that country’s GDP. 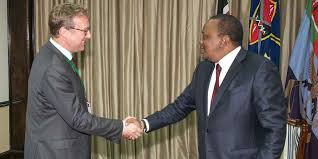 Lenders, among them KCB Group which has the biggest share of mortgages, usually shy away from writing housing loans mainly due to lack of long-term deposits in the industry to match them.