Kenyatta’s political rivals are less upbeat, insisting the crackdown is merely a piece of political theatre designed to keep them in check.

Political pundits believe that President Kenyatta’s war on corruption appeared to be foundering an indication that he is unable to tame close associates who are mentioned by the anti-graft agencies. 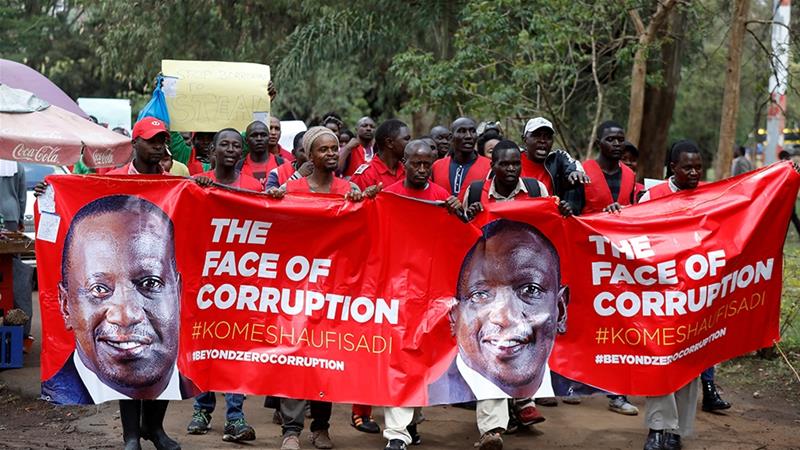 To date, not a single Kenyan public official charged with graft has been convicted. Nearly all mega-corruption scandals remain unsolved, and over 95 corruption cases are currently pending.

Uhuru said some orders have cost the taxpayer billions of shillings and derailed development.

“Our courts must stop the practice of issuing injunctions against investigations of corrupt activities. Issuing these orders makes it easier for the mandarins of corruption to destroy evidence and intimidate witnesses. Kenyans have spoken, this practice must stop,” Uhuru said. DCI George Kinoti and DPP Noordin Haji had said lenient bail and “strange orders from the courts” are some of the hurdles hampering the war on corruption.

Kinoti and Haji said courts make it difficult for the agencies to arrest rich and powerful corruption suspects.

Chief Justice David Maraga came out with guns blazing against attacks at the Judiciary as the weakest link in the war on graft.

Maraga said that the Judiciary is doing everything possible to ensure that the war is won further questioning how the intergovernmental agencies are fighting each other.

Maraga said the DPP and the DCI have been filing half-baked cases in court, with weak evidence. Sometimes, he said, the prosecution appears in court ill-prepared, forcing the presiding judges and magistrates to adjourn the cases.

Kenya is ranked 143 out of 180 on Transparency International’s corruption index, and for years, pervasive graft, cronyism, coupled with ethnic rivalries exploited by political leaders has undermined successive administrations.

The lack of public accountability, centralized power, and the absence of strong state agencies have also strengthened officials’ seemingly insatiable appetite for graft.

The shift in government sentiment about corruption has led ardent critics to declare that officials were finally outshining themselves. As both large-scale and petty corruption practice continue, Kenyans remain skeptical about the fight on corruption. A 2015 Afro -barometer survey showed many believed the police, government officials, and lawmakers were the most corrupt.

The tenth edition of Global Corruption Barometer (GCB) – Africa, released on African Anti-Corruption Day by Transparency International in partnership with Afro-barometer, reveals that more than half of all citizens surveyed in 35 African countries think corruption is getting worse in their country.

Fifty-nine percent of people think their government is doing badly at tackling corruption.

“Corruption is hindering Africa’s economic, political and social development. It is a major barrier to economic growth, good governance, and basic freedoms, like freedom of speech or citizens’ right to hold governments to account,” said Patricia Moreira, Managing Director of Transparency International.