Nyandarua County were shocked after news broke out that a middle aged man has killed two son then commit suicide.

Locals said that Kelvin Wambui, a boda-boda rider  in Mirangine, Nyandarua allegedly left a suicide note saying that he ended his life and that of his two sons after his father-in-law ‘took away his wife’ two years ago making his life miserable.

Mirangine Sub-County police boss Eric Otieno said officers found a blood-stained machete that they suspect was used to attack the two boys aged eight and six while his body was found dangling from the roof.

The UN health agency’s most recent suicide data on Kenya is from August 2018. This estimates the suicide rate as 3.2 cases for every 100,000 people in 2016. Using Kenya’s official population of 45.4 million people that year, this works out to 1,453 suicides. 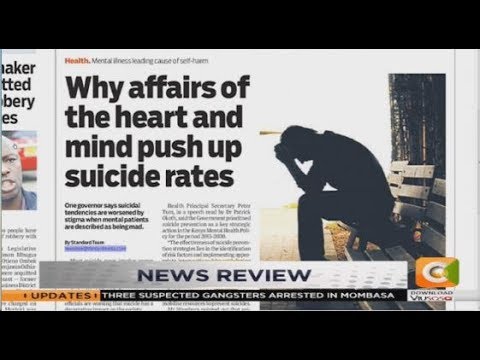 Although the number of suicide cases has been rising since 2008, the data show the lowest incidents were recorded in 2010 at 75 cases.

The report also shows that more men are likely to commit suicide than women. Out of the 421 suicide cases in 2017, 330 involved men.

The World Health Organisation (WHO) states that close to 800,000 people commit suicide every year, which means one person every 40 seconds. Many more attempt suicide, WHO adds.

The World Population Review ranks Kenya at position 114 among 175 countries with the highest suicide rate.