Shock and grief gripped Kiruguma village in Nyeri County on Monday after a police officer committed suicide by hanging himself with a rope inside his house.

The police corporal attached to Ruiru Police Station had reportedly applied for parental leave to return his daughter back to school but hanged himself Monday morning under unclear circumstances.

The body of the deceased was discovered by his wife after noticing that the bedroom had been locked from inside. 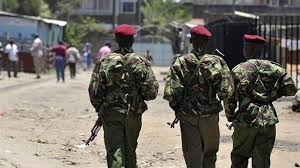 Confirming the incident Nyeri Central police boss Paul Kuria said that the deceased had breakfast with his family and later informed them that he would travel to Nyeri town to purchase shopping for his daughter who was to report back to school.

Kuria said that the officer’s wife, Mary Wachira, had gone to the farm to fetch fodder for their animals.

She discovered the lifeless body of her husband upon returning from the farm.

“When his wife returned from the farm, she found their bedroom locked from inside on peeping she found his body dangling from the roof,” said Kuria.

Kuria confirmed that the officer had sought parental leave which was granted.

He said that the couple had no history of family squabbles adding that they are investigating the incident. Cases of police committing suicide and those of security officer turning their guns on each other or their family members have been on the rise in the past.

There have been reports of roughly a dozen suicide cases a month in the past three months countrywide but official statics by the National Police Service remains largely unavailable.

Former Police Inspector General Joseph Boinnet formed a taskforce in 2016 to investigate suicide cases among the police but the findings the report compiled by the taskforce are yet to be made public.