Kenya’s fastest rising betting firm Odibets has launched a kits initiative that will see local clubs benefit across 47 counties in the country.

Despite the company halting the Sh60 Million shillings shirt partnership with Mathare United due to the ongoing tax challenge, Sayi reiterated the company’s commitment to supporting local talents.

“We are looking forward to contributing in a small way to both fans and local communities, building on the feel-good factor generated by their local team’s success, as they bet responsibly,” he says.

Odibets has been lauded by Kenyans due to it’s grassroots initiatives especially after the recent atotos tournament held in Nairobi where European agents camped to scout local talent.

Jacob Ghost Mulee, who headlined the event, praised the betting firm’s commitment in providing platforms where the youth could showcase their talent adding that it would help further sports and development in this country.

The betting firm’s kits program is one of the biggest initiatives in the country and will help in their expansion plan and penetration.Massive customer incentives

Odibets.com offers a wide range of offers and incentives to its players like the free bets given to new customers. By going to the grassroots, ordinary Kenyans can play for free without depositing while cheering to their teams as a form of entertainment.

Other incentives offered by the company include free deposit bonuses, cashback on bets lost, multibet boosts among others. 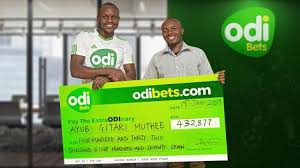 With a huge EPL debut last month, the company will be looking to extend their kits initiative to other aspects that affect the ordinary youth from tournaments, football clinics, among others with the right partners.