The National Treasury is working towards ensuring that investors who bought shares in the oversubscribed Safaricom Initial Public Offer (IPO) eleven years ago get their refunds.

“This issue of Safaricom IPO is not a very big deal, but we have to deal with it so that we can bring it to a closure,” he said in an answer to a journalist’s question on the sidelines of a retreat of the boards of directors of financial sector regulators Thursday. 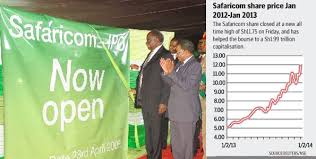 Dr. Mwau said the main challenge had been the fact that many investors bought Safaricom shares through stockbrokers, some of who could not reconcile records with the receiving bank; Citibank, hence the delay in settling the refunds.

“You know that when the IPO was launched, there was a lot of rush by many Kenyans to buy shares from Safaricom, which was a very good thing, but in the process, a lot of people went through stockbrokers,” he said.

He said it was not clear whether all the stockbrokers deposited the money to the receiving bank, leading to the confusion that led to the money remaining with the bank for so long.

“It is not clear whether the bank paid for them or not and that reconciliation has been lingering for a while,” he said adding, “There is money in Citibank that you cannot say who it belongs to.”

He, however, said the stockbrokers were ready to ensure that all people who bought shares through them receive their refunds and that Treasury was working toward finding a formal way of bringing the issue to a closure.

The 2008 Safaricom IPO was overwhelmingly oversubscribed, attracting more than 800,000 new investors who invested more than Sh220 billion against the Sh50 billion the company was seeking through the offer.

It is believed that some fraudsters took advantage of the volumes of cheques on the issue and colluded with stockbrokers and bank staff to access and cash some stolen cheques.

Citibank has insisted that those seeking refunds must produce valid documentary evidence to access their money.

Edwin Ochieng is living true to the calling of Journalism, He is passionate about issues of Business and Politics. Edwin Ochieng is a graduate from St Paul University and East African School of Media Studies (EASMS).
Previous Keny Airports Authority Appoints Acting Managing Director
Next How to Escape From a Sinking Car