National Assembly Majority Leader Aden Duale has hit Kieni member of Parliament Kanini Kega as an extortionist in a long post that he published online.

Duale is embroiled in a fight with Kanini over a plot by Kanini to collect signature to impeach Duale from the assembly as Majority leader.

For the last two weeks, there has been a political battle between followers of the deputy president William Ruto and those who are allied to president Uhuru Kenyatta.

Already Ruto’s two allies Kipchumba Murkomen, Susan Kihika and Kindiki Kithure were removed from their previous position and replaced to those who are loyal to the head of state.

Already political pundits view that the national assembly majority leader Might not be safe from the chopping board. Reacting to Kanini act of collecting a signature, Duale said that he has been very loyal to the head of state. 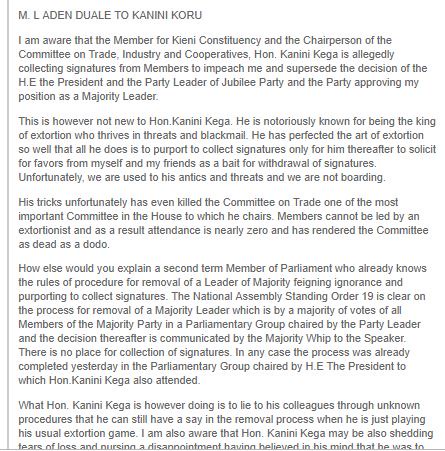 “What Hon. Kanini Kega is however doing is to lie to his colleagues through unknown procedures that he can still have a say in the removal process when he is just playing his usual extortion game. I am also aware that Hon. Kanini Kega may be also shedding tears of loss and nursing a disappointment having believed in his mind that he was to be the next Majority Leader. Yesterday, Jubilee Parliamentary Group meeting, however, made his dreams end in a bang,” Duale said.

Duale said that Kanini has been aiming the seat of the majority in the national assembly which Duale said isn’t easy as ABCD.

According to report that was published by Tuko.co.ke, the president was forced to spare Duale in the last parliamentary group at State House after he started crying for about 10 minutes and leading to the delay of the meeting.

The report states that the president was holed up in a meeting with Duale that lasted for more than two hours where Dualed pleaded with him to spare him from the seam.

Already political pundits view that the chopping exercise isn’t over as majority of Ruto allies holding positions are being prepared to exit.

Already Gatundu South Mp Moses Kuria has been requested to resign from the transport committee.

Edwin Ochieng is living true to the calling of Journalism, He is passionate about issues of Business and Politics. Edwin Ochieng is a graduate from St Paul University and East African School of Media Studies (EASMS).
Previous Top 5 Players in the Premier League this Season
Next Details Leak on Why DP Ruto had to Visit Dreaded Elders From Koitalel Clan