Edwin Ochieng 1 week ago Business, News Comments Off on Mitumba Association Assists Gikomba Fire Victims, Call For the lifting of Ban to Save Livelihoods and 2 Million Jobs 103 Views

Officials of the Mitumba Association have today urged the Ministry of Trade, Industrialization and Enterprise Development to lift the ban on second-hand clothing imposed in early March by the Kenya Bureau of Standards (Kebs) to save two million and an additional 19 million who trade and purchase mitumba items respectively.

This follows the submission by the Association of guidelines for the Mitumba operations as part of an agreement with the Ministry.

The Association’s officials were speaking during an exercise to donate food and clothing items to over 140 traders and their families who were affected by the fire that gutted the Gikomba Market two days ago.

During the exercise, all the affected traders stated that they were unable to restock their wares since the ban on second-hand clothes and footwear has interrupted the supply of their wares.

They are concerned that hundreds of thousands of jobs have already been lost despite the continued and steady demand for affordable clothes and footwear by Kenyans facing economic hardships.

Speaking at the event, the Mitumba Association Chairperson, Ms Teresia Wairimu lamented about the jobs lost and impact on livelihoods, following the continued application of the temporary ban on importation of second-hand clothes and footwear.

She said: “Following our meeting with the respective Cabinet Secretary on Monday, we agreed and thereafter submitted a set of comprehensive guidelines to guide the continued importation and trading of mitumba in the country.”

She added: “As the Ministry charged with supporting Kenyan entrepreneurs, we are confident that it has the power and intention of protecting over 2 million Kenyans and an additional 19 million who trade and purchase mitumba items respectively.

We estimate that nearly 350,000 Kenyans in the industry have already lost their livelihoods and if the temporal measure is not lifted, millions of more livelihoods will be affected.”

Whereas Kebs instituted the ban at the onset of the Covid-19 pandemic, the Mitumba Association is emboldened by the latest scientific advice indicating that the importation of second-hand garments and shoes into Kenya poses no credible public health risk. 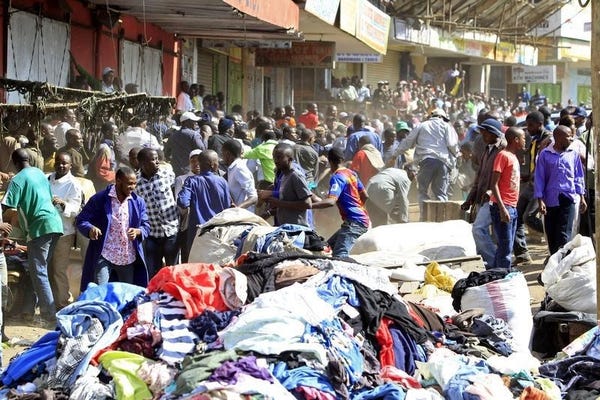 According to the Association, prohibiting the movement of goods or commodities has not been recommended by the World Health Organisation (WHO) as a measure to contain the spread of Covid-19.

The guidelines developed and submitted by the Association are poised to enhance the health protocols effected at countries of origin, ensure supervised re-fumigation upon arrival at the port, the introduction of additional health clearance certificate among other measures.

Equally, the guidelines provide detailed workplace protocols for the over 2 million traders, the majority of whom operate from open-air markets across the country.

Edwin Ochieng is living true to the calling of Journalism, He is passionate about issues of Business and Politics. Edwin Ochieng is a graduate from St Paul University and East African School of Media Studies (EASMS).
Previous City Mechanic Cry to Kenyans to Help Raise sh130,000 to clear Hospital Bill for his Son at Kijabe Hospital
Next Why is it That Everyone is Looking for Avocado Leaves?

Exclusive Photos of Police Chopper that Crashed in Meru