Wiper leader Kalonzo Musyoka, Machakos Governor Alfred Mutua and his Makueni Counterpart Kivutha Kibwana are now engaging in supremacy battle on who should lead the Kamba community in the country’s succession politics comes 2022.

Already the three have declared interest to vie for president, with Kibwana being the latest kid in the block.

The last week announcement of Kibwana to contest for presidency caught Ukambani leaders unaware as he had not shown any sign despite being pushed by Kenyans especially on social media. 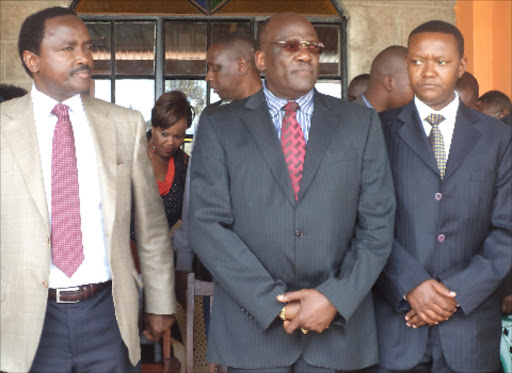 He and Mutua are completing their second term as governors.

Also, the latest announcement by former Machakos Senator Johnstone Muthama that he has ditched Kalonzo and he is warming up for Ruto complicated the matter.

Muthama’s declaration has been termed as a big blow to Kalonzo as he will lead a well-coordinated campaign on the grassroots level like he did in 2013 and 2017.

Analysts state that the fight over Ukambani votes is intense and Kalonzo will have to go back to the drawing board to avert being demoted as the community kingpin.

While announcing his candidature on tweeter, Kibwana said that he was ready to vie for the top seat after listening to the constant prodding by Kenyans asking him to take up the challenge.

“I have listened to the voice of Wanjiku asking me to run for (the) presidency in the coming election. I am available, ready and willing to be Wanjiku’s President. Will go all the way to the Ballot Box with Wanjiku in 2022. We must ensure devolution works for our communities,” tweeted Mr Kibwana.

Political analysts further argue that Kalonzo’s alliance with Raila Odinga seemed to have dwindled with the collapse of the National Super Alliance (NASA).

Noting that Kalonzo will have a rough time trying to form a unity block in Ukambani after fall out with Muthama who has declared total support for Ruto.

In the 2017 general election, Muthama played a key role in uniting Ukambani leaders in campaigning for the NASA alliance.

A few weeks ago, Kitui governor Charity Ngilu accused Kalonzo Musyoka of bankrolling MCAs in her County to file a motion of impeachment.

Ngilu had claimed Kalonzo had instructed Wiper ward reps in the Assembly to frustrate her and deny Kitui residents development.

Kitui Senator Enock Wambua, a close ally of the former Vice President, dismissed Ngilu’s assertions as unfortunate, saying the sentiment was meant to besmirch Kalonzo as an anti-development leader.

“What a shame from a person who personifies failure, political treachery and deceit. Ngilu must desist from dragging the name of Kalonzo Musyoka to her self-inflicted woes,” Wambua said in a statement to newsrooms.
On the other hand, Machakos Governor Alfred Mutua, a long-time critic of Kalonzo declared that he will contest for presidency 2022.

On several videos released online translated on different dialect, Mutua said that his leadership as president will bring transformation across the Country.

“In 2022 I will vie to become the 5th President of Kenya. There is nothing wrong with that. But I am not consumed by a desperate campaign and politicisation that is slowing down our economic growth,” said Mutua, who is also the Machakos Governor.

Edwin Ochieng is living true to the calling of Journalism, He is passionate about issues of Business and Politics. Edwin Ochieng is a graduate from St Paul University and East African School of Media Studies (EASMS).
Previous Why Should Start Eating Cassava Leaves, Your Body Require Them than You Know
Next Kitchen Hacks : Making Home Made Pilau Masala