Celebrated gospel artist and tano tena composer and singer Ben Githae have revealed that his Christianity life has faced a lot of challenges.

Speaking during an interview with online tv (Reke Ciume nene ) , Ben Githae said that there was a time he backslides and decided to take alcohol only for Muigai to emerge from nowhere and take the alcohol away.

Ben said that they had travelled to a certain event and depression took its coarse and that when he ordered for guarana. 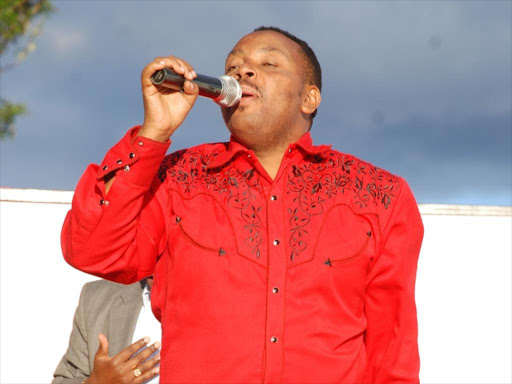 Ben Githae in a past event

“I just swallowed the first sip and it was very nice but my friend Muigai Wa Njoroge came and throw it away and that when i decided to stick back to God and fully serve him, “He said.

He added that the temptation to drink would have cost him a lot as since he was young, his grandmother warned him of drinking alcohol.

“When Muigai funds me holding the alcohol, he reminded me that my grandmother had cursed me not to drink alcohol and up to date am always careful,” He added.

Last year, Ben Githae coated controversies after a woman accused him of neglecting his child.

During the interview, Ben relieved that that scandal almost destroyed his family as up to date things have never gone back to normal as they used to be.

He further disclosed that he has more children outside his wedlock but the family has fully recognised them and currently they are all living in harmony.

He accused artists as well as other Kenyans of being hypocrites and only attacking people while they are full of sin.

“One day, i will parade all my children here for people to see them, they are very intelligent and very clean, they call me dad and am very happy of them and for those saying that i don’t support my family, they will be shocked,” he said.

He further denied the latest sentiment by Gatundu South MP Moses Kuria that gospel artists meet at homeland to drink.

“You will indeed find us at homeland but we drink tea and sodas,” he said warning other artists of spying on their colleagues and leaking to the media.

“Let those who drink enjoy but stop spying on them, that is not fair at all,” Ben noted.

Edwin Ochieng is living true to the calling of Journalism, He is passionate about issues of Business and Politics. Edwin Ochieng is a graduate from St Paul University and East African School of Media Studies (EASMS).
Previous Ruto’s Critic Kimani Wa Turacco to Face-off With Moses Kuria for Gatundu South Parliamentary Seat 2022
Next Why Almost Everyone is Using Cucumber, This is the Secret behind