Sabina Chege and Her Quest to Tame Ruto in Mount Kenya

Edwin Ochieng August 12, 2020 News Comments Off on Sabina Chege and Her Quest to Tame Ruto in Mount Kenya 372 Views

Before the introduction of handshake,Sabina Chege and deputy president William Ruto were once great friends and they could be seen walking from one harambee to harambee.

Political analysts accused brokers of being behind their wores as they could trace Sabina and send the wrong message to DP strategy team. 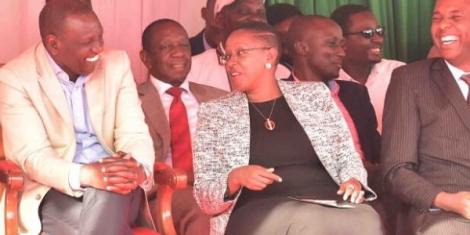 They argue that,it reached a point where the tangatanga team felt uncomfortable being with the women representative.

Due to frustrations,Sabina decided to walk out and back president Uhuru Kenyatta and Raila Odinga quench to popuralize the handshake within the Mount Kenya region.

In a recent interview with the media,Sabina Chege almost exchanged blow with Nakuru senator Susan Kihika.

Kihika accused Sabina of being behind deputy Ruto woes.

The senator further alleged that Sabina alongside other Kieleweke leaders have been plotting the down fall of Ruto.

“We know what Sabina Chege has been up to and they will not succeed on their tactics,she said.

Sabina refuted the claims noting that her problem with Ruto is that he doesn’t respect president Uhuru Kenyatta.

The deputy president has set a strategic team across the country to ensure that he can transverse across the Country easily.

During several media interviews,Sabina Chege maintained that nothing will stop her for fighting anyone who might disrespect the head of state.

Sabina has on several occassion accused Ruto of using his colonies to undermine the head of state.

Uhuru has on several occassion warned politicians of campaigning ahead of 2022.

Edwin Ochieng is living true to the calling of Journalism, He is passionate about issues of Business and Politics. Edwin Ochieng is a graduate from St Paul University and East African School of Media Studies (EASMS).
Previous Want to engage in agribusiness? Lessons from the Quality Meat Packers Limited NAIROBI, Kenya
Next UON Student Reveals How She has Been Infecting Fellow Scholars With HIV