Even After Uhuru Bought Him Prado,Youngest MP John Mwirigi is Against BBI,Supports DP Ruto 2022 Presidency

Edwin Ochieng 3 weeks ago News, Politics Comments Off on Even After Uhuru Bought Him Prado,Youngest MP John Mwirigi is Against BBI,Supports DP Ruto 2022 Presidency 1,210 Views

Igembe South Constituency member of parliament John Paul Mwirigi can be described as an ungrateful person.

In 2017 after he won the parliamentary seat,the MP was given a brand new prado by president Uhuru Kenyatta to ease his movement in his constituency.

By then he was a student at Mount Kenya University and he didn’t have such money to cater for high end vehicles as was expected of him.

He said that Meru governor Kiraitu Murungi has accused Mwirigi of frustrating the head of state. 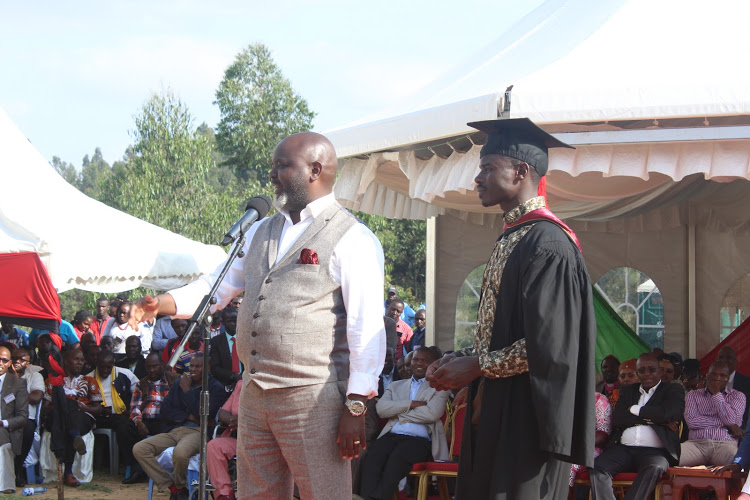 “Several leaders are against the MP opposing the BBI in his region as its a sign of disrespect to the head of state,”he said.

The source state that,the MP has on several occasion sported with team that is campaigning for deputy president William Ruto.

The DP is accused by political players allied to opposition leader Raila Odinga of brainwashing the leaders from the Mount Kenya region.

The DP has been facing a lot of resistant with section of leaders who accuse him of disrespecting the head of state Uhuru Kenyatta.

During the recent interview with Citizen television,the DP accused the system of trying to frustrate his ambitions to succeed Uhuru comes 2022.

The DP said that him and Uhuru Kenyatta are great friend but powerful forces have been trying to sabotage him from succeeding.

Also while in interview,Jubilee party vice chair David Murathe accused Ruto of being a hypocrite and scheming behind Uhuru.

Murathe said that they working very hard to ensure that they will find a suitable candidate to succeed Uhuru but not deputy president.

“We are working hard to ensure that Ruto does not become president 2022,”he said.

Edwin Ochieng is living true to the calling of Journalism, He is passionate about issues of Business and Politics. Edwin Ochieng is a graduate from St Paul University and East African School of Media Studies (EASMS).
Previous What MP Johana Ng’eno Did While in Court,Will He be Jailed?
Next Waititu has Been Battling Cancer Since 2018,That Why He is Missing in Action