Kesses constituency Member of Parliament Swarup Mishra has continued to find himself in more trouble even as the 2022 general elections draw closer. The lawmaker who won the seat by a landslide in 2017 despite being an Indian was the darling of Kesses residents, Deputy President William Ruto and the entire Kalenjin community before his favour was swept away by the prevailing political tides.

William Ruto’s allies and Kesses based opinion shapers now accuse the lawmaker of secretly supporting their rival Kieleweke brigade which is strongly against William Ruto’s 2022 State House ambitions. This has led to numerous demonstrations in Kesses as residents take to the streets and accuse their once favourite leader of several corruption scandals. The situation seems to be taking a worse turn as the legislator now needs a police escort to attend local  functions and gatherings which have been rocked by chaos and mayhem in the past. 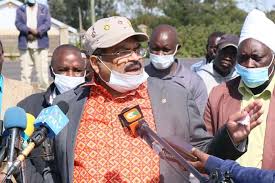 Mishra’s political life deteriorated last Sunday after the lawmaker went missing in a crucial event at Kesses shopping centre where he was set to lead the locals in raising funds for the burial preparations of Jude Kiplagat, a young man who succumbed to leukaemia in India last week.

Neighboring Kapseret Member of Parliament Oscar Kipchumba Sudi was forced to preside over the function after neither Mishra nor his aides failed to turn up.

The event soon turned into a political gathering as all the politicians and leaders present shifted their focus attacked, dismantled and rambled on Mishra’s politics. The politicians warned the locals against re-electing Mishra claiming that he has merged forces with those who are against Ruto’s presidential bid and are now working hard to bring their son down.

The remaining two years will be a tough moment for Mishra as he fights for survival and to cleanse his name in the political arena where manifesto, vision and mission have nothing to do with one’s election.

Edwin Ochieng is living true to the calling of Journalism, He is passionate about issues of Business and Politics. Edwin Ochieng is a graduate from St Paul University and East African School of Media Studies (EASMS).
Previous Thika Town MP Slammed for neglecting his Electoral Duties, He is Busy Campaigning for Kiambu Top Seat
Next Today Nation And Standard Newspaper Review Featuring Teachers In School And Arrest Of MPs Over Chaos