In 2013, there was an agreement that President Uhuru Kenyatta will support his deputy president William Ruto in 2022; but things seem to have taken a different route as Mount Kenya elders now claim the DP doesn’t deserve the region support for being disloyal to Uhuru Kenyatta.

The Council chairman in an interview has said that it’s unfortunate that the Deputy President has been disrespecting the head of state by holding parallel meetings at his Karen office and neglecting his duties. 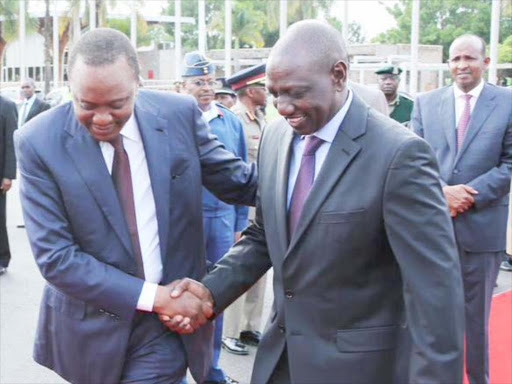 Mr. Wachira said that it’s not a big deal for Mount Kenya region to have another candidate comes 2022 that will protect the interest of the community.

“We don’t believe that the DP will protect our interests and we might be forced to field another Kikuyu while Uhuru remains as region kingpin, “he said.

Wachira said that they have opened a platform for the aspirants eyeing to succeed Uhuru from the region meet them for a talk and the council will diligently endorse one candidate.

He further pointed out that Uhuru will play a key role to endorse and campaign for whoever will fit as his successor.

“Our president has immense experience and his successor will have to prove it too and we shall listen to everyone ahead of the nominations of the party,” he states.

Political pundits observe that although the president had during 2017 campaigns agreed that he will support his deputy after he retires, that agreement might not be abiding after the witnessed party infighting.

Political analyst Macharia Munene has said that the DP meeting across the Mount Kenya region is well planned despite Uhuru warning him of engaging into early campaigns.

“The DP is just intensifying what he started, he is putting more effort to be seen everywhere across the country, “he said.

Former Maragua MP Peter Kamande Wambuku has said that the Mount Kenya region will not be blackmailed to support the Deputy President.

“Ruto has on several occasion disobeyed Uhuru’s order and it will be very hard for him to woo the people of Mount Kenya region,” he states.

Already the Jubilee party has announced the removal of William Ruto as Deputy Party Leader.

This comes a day after the Deputy President stormed the offices accompanied by more than 30 members of parliament.