Edwin Ochieng 7 days ago News, Politics Comments Off on Job creation and economic revival will be my priorities, Alfred Mutua 94 Views

Presidential aspirant and Machakos Governor Dr Alfred Mutua has promised to sort youth unemployment and resuscitate Kenya’s crumbling economy if Kenyans elect him their president in 2022.

Speaking in Nyeri during a meet-the-people tour, the Maendeleo Chap Chap Party leader expressed disappointment at the massive joblessness prevailing in the country, especially among graduates.

“It is regrettable that the government is unable to create job opportunities for our best brains who are graduating from our universities. My first agenda when I become president will be to reverse this situation to give young people the capacity to develop themselves, their families and our country at large,” said Dr Mutua.

Mutua added that the country needs a visionary president post 2022, saying this is the president who will fix the economic turbulence created by the Covid-19 pandemic.

He called upon residents of the Mount Kenya region to shun politicians whose agenda is to divide them, saying the chaos witnessed in some parts of the region in the recent past were placing the country in a retrogressive trajectory.

“The political rhetoric and chest thumping that we have witnessed in parts of this region in the recent past is not good for the people,” Mutua said.

Mutua observed that there are political leaders taking advantage of the fact that President Uhuru Kenyatta is serving his final term to divide the central region for selfish political reasons. 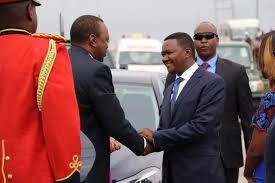 “I was politically nurtured by former president Mwai Kibaki and I have matured politically under President Uhuru Kenyatta, both of whom are sons of this land, and I am perturbed with the political on-goings in central Kenya that if not checked will reverse all the gains made by both Kibaki and Uhuru,” he said.

Since he launched his campaigns for the presidency early September, Dr Mutua has conducted forums in Meru, Isiolo and Embu and Tharaka Nithi in visits dubbed “Fresh People Listening Tours” during which he listening to the challenging that wananchi are grappling with.

Nyeri residents expressed confidence in the leadership of Dr Mutua and called upon him to address the slow rate of economic growth, unemployment and lack of markets for local products such as tea, coffee and milk when he becomes president.

Mutua said he would factor the concerns voiced by the people during his visits in the building of a people-centred manifesto.

Edwin Ochieng is living true to the calling of Journalism, He is passionate about issues of Business and Politics. Edwin Ochieng is a graduate from St Paul University and East African School of Media Studies (EASMS).
Previous Governor Nyoro Says New Kirigiti Stadium will be a Game Changer for Kiambu Youths
Next Nyeri Businessman Thuo Mathenge’s Party Ready for By-election